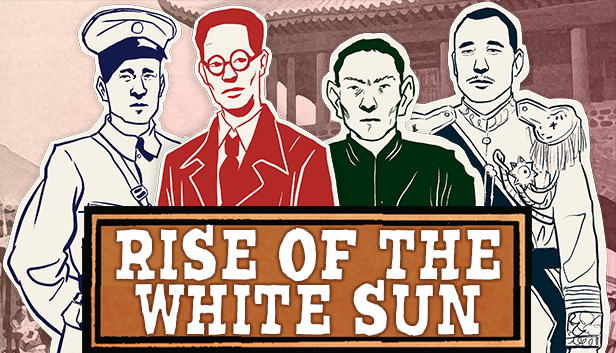 We hope you are all well and safe. A quick post to let you know we have been steadily progressing with the game. Since February 2022, you can download demo up on Steam! Make sure you give it a try as the game has known quite an extension from the Shanghai Uprising scenario presented last time.

Our art style has now been nailed for good as well as we fell in love with this hand-drawn style for our characters! For now, some 60-ish historical figures already have their portrait in-game. We made a decision to go with a colour code for characters to help you identify the faction they belong to (e.g. a charact in red is aligned with the Chinese Communist Party.) You will find here below a small selection of portraits, just for the pleasure!

The demo now has four scenarii, which will also be the ones available at game release. Let us have a quick look at what you can expect.

This small scenario will have teleported in 1924 Guangxi. A little but of context: the province is under the control of Lu Rongting, who administers Guangxi on behalf of the Beijing government. However, his (Old) Guangxi clique is increasingly challenged by a group of younger and less powerful warlords eager to seize power. The soon-to-be-called New Guangxi clique makes an alliance with the Guomindang to bolster their forces and gain legitimacy. Another small warlord, Shen Hongying, supported by the powerful Wu Peifu, joins the battle along the New Guangxi clique against Lu Rongting and his minions.

All in all, this is quite a flavourful scenario with limited scope that lets you discover RoWS and its gameplay. You will be able to touch provincial / district management, characters and warfare.

You should already be familiar with this scenario focused on the 1927 Shanghai Uprising. The GMD Northern Expedition is progressing towards the economic heart of China, the wealthy port of Shanghai, destroying warlord armies along the way. GMD agents are sent to Shanghai with a view to prepare the smooth occupation of the city. However, CCP agents are actively trying to build up an insurrection, what is likely to jeopardise the GMD efforts. The alliance between the two parties is fragile, how long will it survive? The Warlords (Sun Chuanfang’s men, replaced at some point by Zhang Zongchang’s) try their best to keep the Pearl of the Orient under their control until they can negotiate a favourable outcome for themselves. Last but not least, a local force to be reckoned with, the Shanghai Green Gang gangsters only seek to preserve their business; they will navigate between the other three players, possibly tipping the balance in favour of one!

This scenario – the very first one we worked on – is entirely aimed at having you testing the ways to build up an insurrection (CCP), undermine control (GMD) or save your *rses while trying to keep everything from falling apart (Warlords). A faction (the Shanghai Green Gang) has to protect its revenues base at all cost, by allying to one or the other faction.

The death of Sun Yat-sen in March 1925 resulted in a struggle for power within the GMD party. Tang Jiyao, head of the powerful Yunnan clique and member of the GMD, feels his position entitles him to the presidency. The staunch refusal from GMD top management and their New Guangxi Clique allies is the cause of a 2-year long conflict ravaging four southern Chinese provinces (Guangdong, Guangxi, Guizhou and Yunnan). Four factions are here for you to play. The Yunnan clique, headed by Tang Jiyao, definitely is the top dog here and, by letting you steamroll through the game, is a excellent way for you to get acquainted with the game’s features. As the GMD / New Guangxi Clique, you will have to fend off the aggression but will you survive the onslaught? The Guizhou clique, allied to the Yunnan clique, is struggling with a dramatic famine and a mystical rebellion. You will have to deal with these issues but your Yunnanese ally also expect you to help him! Finally, Shen Hongying (present in the first scenario) will be fighting for his very survival as the alliance with the New Guangxi clique broke down.

This scenario also lets you dabble in character management, province / district management and warfare with a limited number of players involved.

The Guangzhou Revolutionary Base

This scenario is sent in the same timeframe as the previous one but drastically expands the number of factions involved: the fight will rage between over 8 factions over 4 provinces.! The Eastern Expedition is about to begin: the GMD in Guangzhou will try to get rid of Chen Jiongming once an for all, while resisting the Yunnanese usurper Tang Jiyao. As the GMD, you will also have a hand in the very large Hong Kong strike that did put the British colony to an almost complete stop. However, the protection provided by a mercenary Yunnanese general, Yang Ximin, is proving more of a nuisance than a real help… The New Guangxi clique is a much sounder ally though they may have intentions not perfectly aligned on yours… And what to say about the alliance with Communists? Sure, this enable the GMD to rely Soviet assistance but their views for the future of China are different. If you add on top of this some local warlords fighting for their own gain, Shen Hongying (again!) trying to achieve something, the Guizhou clique struggling for survival, you will be up for a gigantic mess!

Like the first and third scenario, you will be able to test your capabilities in managing provinces and armies on a larger scale. However, if you play as the GMD, you will be able to access a specific feature: government management! Balancing the factions will be necessary to ensure victory.

This will be all for this DD. We hope these few elements somewhat did wet your appetite. Stay tune for more!