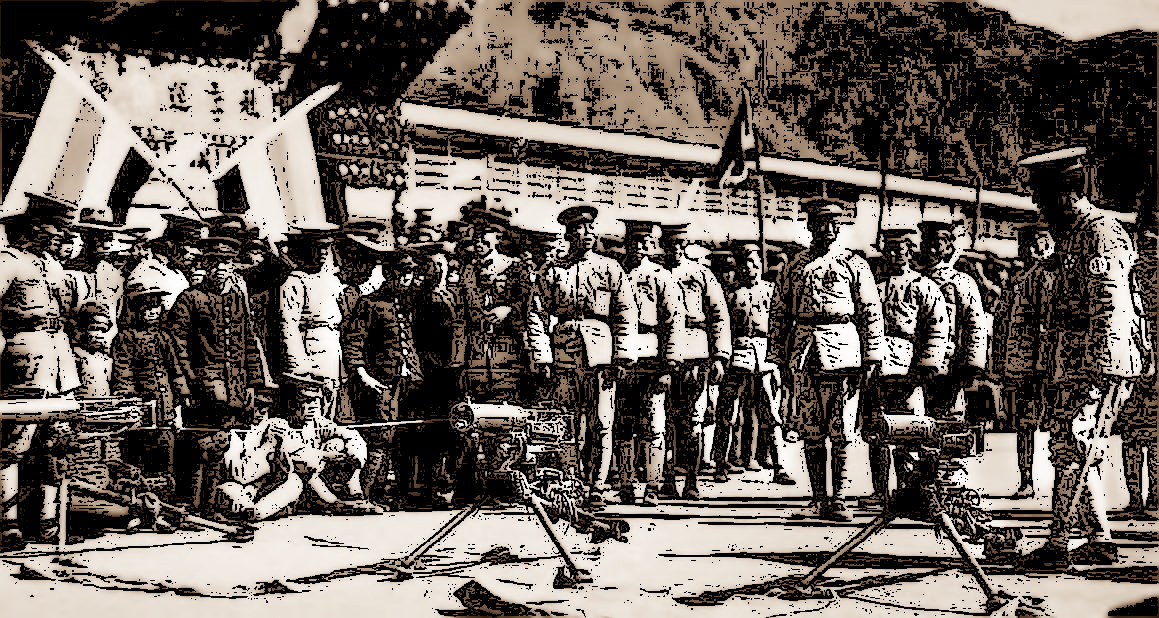 We return today with the second part of our focus dedicated to the Chinese soldier in the 1920s. Today, we will delve into the complexities of recruitment in a warlord army.

In the early 20th century, the immense majority of China was still rural and poor. There were only four ways to hope for economic mobility and social ascension:

Enlistment was voluntary in China until the outbreak of the Anti-Japanese War in 1937. However, you should not see this as selfless dedication to a cause or country (though Guomindang soldiers, at the beginning, were driven by idealism). This was rather a mercenary contract: the soldier was in for regular food, irregular pay and occasional loots.

Some warlords like Bai Chongxi worked toward establishing conscription systems. These were never imposed at national level, despite the idea floating around under Yuan Shikai’s presidency. Press-ganging did however take place but rather to fill in the needs for coolies rather than soldiers.

The majority of leavers were young men with no dependents. They were mostly coming from families with more than one son, trying to escape poverty. However, poverty alone cannot explain the attraction of the army. In the mix were also security concerns (an irregular army pay was somewhat more securing than farming income), fleeing the hard work of farming, escaping the boredom of village life or hiding away from problems with the law or with the family. Some recruits were also lured by enlistment bonuses. Those ranged between 20 and 30 yuans on average during the Warlord era but were often not paid. Unsurprisingly, men with martial arts skills were a good source of recruits; they had some form of training which could be channelled into military life.

Some regions were especially “productive” in churning out soldiers; these were generally poor, backward and remote from major economic centres. Shandong, Henan and Hebei were for example particularly significant producers. At a lesser level, smaller areas like West Hunan-East Guizhou or Clans in Guangdong, living on constant feuds, were known for producing large number of soldiers.

Interestingly, Chinese minorities were avoided by recruiters as they saw Hans as enemies. A few warlords managed to muster ethnically homogenous units out of minorities like Long Yun’s Lolos (Yunnan) and Lu Rongting’s Zhuangs (Guangxi).

Though the Chinese soldier was indeed a mercenary, he nonetheless had to be actively recruited. There would be no army otherwise!

Recruitment usually increased before large battles and often steadily decreased afterward for a while; casualties acting as a deterrent to potential candidates. Two pools of potential recruits existed: civilians and existing armed men (bandits, militias, etc.) who were incorporated with their equipment.

Traditionally, recruitment in pre-Republican China followed an unofficial father / son soldiers (Fùzǐ bīng,父子兵) system where the military quality was transferred to male children. This was especially true under the Qings in the Green Banners, comprised of non-Manchu men (the Manchu Banners were themselves formally hereditary). Now that demand was booming, this traditional way of recruiting was no longer providing sufficient troops. It however remained a trusted recruitment method. A young man was more likely to join a unit where a brother, a cousin was serving. Said relative who would even probably be the one recruiting, as small rewards were given for bringing in new bodies.

Now that the warlord era with massive armies was a reality, a number of ways were used to attract recruits.

An officer’s personnal ties with family, people or native places was a good way of recruiting men. This type of recruitment often characterised the better armies as the officer was bound to his men by closer ties. Men would indeed more easily serve a known officer who would care (to a variable extent) for them. Soldiers themselves liked these units which were as a result more homogenous; they knew they could expect mutual support, friendship. The officer, in return, could trust his men. To strengthen his numbers, he would not even have to go in person to his native place to attract recruits. Sending the men back home with a recruitment task was rather efficient. Feng Yuxiang was known for relying on this kind of system. If this recruitment system was the most reliable, it was however rather time- and resource-consuming. It has to be complemented by other methods.

Very much akin to mercenaries in Medieval Europe, these “professionals” came in two varieties: military and civilians:

Warlords with sufficiently large and established territorial bases could rely on the local county authorities to provide them with a number of men by a given date. Sometimes, a rationalised and ‘humanitarian’ system was organised, like in Shandong under Zhang Zongchang (in theory): a pro-rata is made among the families – a family with two sons gives one, one with three gives two, etc; a family could not be deprived of their only son. More often than not, local authorities were reluctantly complying with these demands as they had to pay recruitment (enlistment bonus, etc.) out of their own budget! The only advantage they saw was that this was a convenient way to get rid of the local scum and undesirables by dumping them away into the army.

Probably the most visible form of recruitment, an officer or an army would set up a booth in a public place (market, temple) with a huge board bearing two signs: 招兵 (Zhāo bīng, ‘soldiers wanted’). Bystanders would be sold a wonderful new life in the army by the person manning the booth. This could be completed by posters here and there as well as soldiers scouring the streets to attract potential recruits up to the booth. Competition for recruits was however often quite strong and needed additional moves to get the most. Some warlords, like Feng Yuxiang in 1913, ran large operations such as taking over a theatre and providing free entertainment including propaganda about army life.

This casual street recruitment may suggest that armies were not particularly demanding regarding the qualities of the recruits, except for the capacity to be mobile but that would be over-generalising – some armies did set minimum criteria for enlistment like height, strength and physical condition. These criteria were however often a formality and warlords would go with whoever signed in, provided they were not a cripple. Educated men were a rather rare sight and standards set during the late Qing New Armies quickly eroded as the Warlord Era unfurled. Willingness to serve was more important than education, morality or quality standards.

Many men already knew how to use a gun in 1920s China. They just had to be « recycled » into the army!

The foreign mercenaries were mostly White Russians fleeing to Manchuria and North China after the end of the Russian Civil War and Japanese officers. The Russians came with their equipment and their armoured trains. Zhang Zongchang kept a White Russian unit on roster until he was defeated in 1928. If White Russians supported warlords, the Soviets cooperated with the GMD from 1923 to 1927, sending advisors to help training the new Revolutionary Army. The Japanese advisors were often spying for their country while in a warlord’s service. Zhang Zuolin had some 11 Japanese of Lieutenant-Colonel rank in his staff.

We also have traces of other Westerners (Europeans and Americans) serving warlords. For instance, a group of 15 British officers is reported to have offered their services free of charge to Zhang Zuolin in February 1927! The most famous English man to have navigated in this warlord era is probably Frank ‘One-Armed’ Sutton. He served different warlords, selling the Stokes mortar licence in China. Sutton eventually ended up working for Zhang Zuolin as head of the Mukden Arsenal. He trained around 1,000 men to use Stokes mortar and claim his efforts were instrumental in securing Zhang’s victory during the 1924 Second Zhili-Fengtian war.

As you can see, recruitment was an easy job for the growth industry that armies were in the 1920s and remained as such until 1937!

Every army is comprised of groups of men led by officers. The degree of separation between the two groups depends on the latters’ attitude toward the formers. China did not have a formal caste separation between officers and enlisted men like the German, British or Japanese army had before WW2. Serving in the Qing Green Banners was devoid of any social standing as the civilian administration yielded more prestige. Only the Xiang and Huai Armies saw this type of relations between officers and men. However, these officers were not professional militaries but civilian scholar-bureaucrats who switched to military career to meet emergency.

The social gap between officers and enlisted men was not so great during the late Qing and early Republican era. As military schools of the modern type were established like Baoding and Whampoa Academies, a military career became more attractive to cadets of higher social origins. This phenomenon led in parallel to a sharp decline of promotion from the ranks; those who managed to do so would often get stuck at lieutenant rank.

Officers could tried and alleviate some of the inconveniences of these relationships by basing his units on regional ties, which were useful in cementing unity.

And we will conclude the part 2 here. There is still more to cover in the next focus – training, life in the army, fashion(!), etc. Finding pictures to illustrate the article is as usual complicated but we hope these remain of interest to you even if less directly connected to the topic!