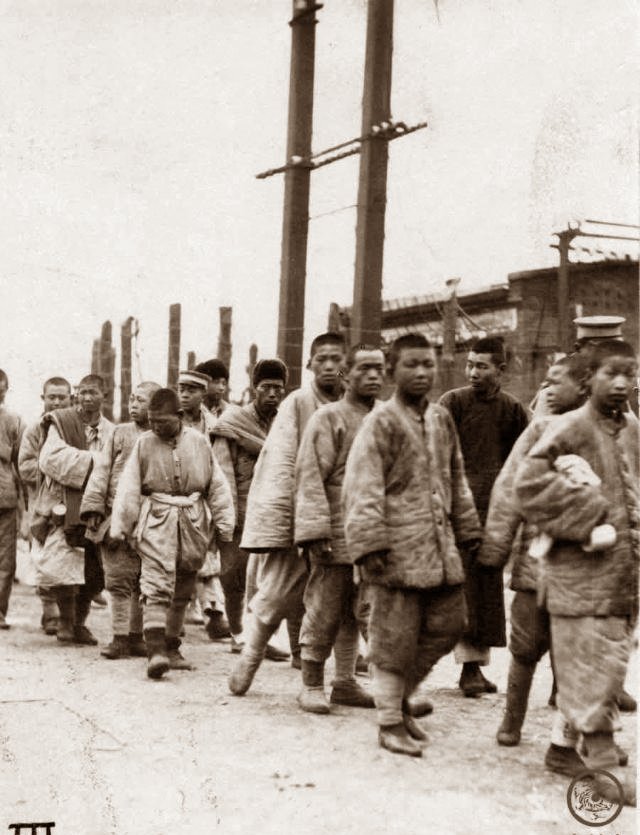 Today will be the day where we (finally) close this series of articles on Chinese soldiers in the 1920s. We have explored wars, recruitment, life in the army and the battlefield. However, no one serves forever (though the case may have happened)! Today, we talk about leaving the army in 1920s China. Get ready for our final ride!

A man not dying from routine violence, neglect or sustained wound will eventually leave the army after some time. However, Warlord China had virtually no ‘veterans’. Only ex-soldiers as men left service in so many different ways that the concept of honourable discharge was almost meaningless. Besides dying from injuries / maltreatment, leaving the army was done through three main ways: desertion, disbandment and retirement.

Desertion was undoubtedly the prime way out of the army. Despite harsh punishment if one was caught, desertion was unofficially accepted by commanders as a form of natural selection. Disgruntled soldiers were considered of poor combat value and not worth the effort needed to hunt deserters. Concentrating on recruitment was considered more interesting. Soldiers (particularly married ones) would, whenever possible, take advantage of sanctioned extended leave. For instance, they would return home to help with planting and harvesting and take advantage to abandon the army definitely.

A good estimation on desertion rate was provided by Li Zongren in 1928. He gauged the yearly desertion of his units to reach some 50%! Deserters tended to shorten their time in the army as much as possible. For instance, the average service time in the Nanjing Garrison in 1928 was six months before desertion, not reflecting those who stayed for a mere two weeks.

But why deserting? Apart from avoiding maltreatment? Because it was incredibly easy in the absence of a centralised police system to hunt deserters. A soldier would also desert to test different armies or armed groups and see which one suited him the most. They would also desert if having been pressed-ganged; for instance, young men who were forcefully recruited in Chengdu in 1926 were all gone within a month. Desertion would also happen in the eve of a battle if no sense of loyalty, greed, bravery or else motivated the men. They would also try to calculate the odds of winning the battle beforehand and act accordingly. Desertion on the battlefield was harder but could happen. This would then be mostly the men located on the flanks or during a general retreat.

Cases of unvoluntary desertions have been reported like in 1927, in Zhejiang. Men under Bai Baoshan’s command (a warlord), carrying banners with the surname of their officer, saw the enemy force carrying banners with the same character. They assumed some of their forces had switched sides and left the battlefield at once. Actually, these banners were carried by men of the GMD commander Bai Chongxi! GMD soldiers, during the Northern Expedition, were feared by warlords as they were much less likely to desert during battles.

A deserting soldier never really left empty-handed: he would leave with his uniform, sometimes gun and bedding. These could be sold for some good cash or use as an asset into entering another armed force. And the cycle would go on.

Contrary to desertion, disbandment was a formal process of identifying a proportion of an existing force, disarming them and returning them to civilian life. This was to come with a compensation to help the now discharged solders start a new life. One significant attempt at reducing the number of soldiers in China took place in 1928, after the Northern Expedition concluded successfully, in the form of the four-day Disbandment Conference.

A limited effectiveness of disbandment

None of these schemes had the desired effect. Among the proponents of disbandment were three categories of people: the politicians and government officials (seeking to cut military expenditures), intellectuals (for the sake of China) and ordinary people (crying to have less bullies on their back). Unfortunately, those who had the power to make disbandment a success – the militaries – were absolutely unenthusiastic about the idea. Soldiers were the key resources of military commanders, especially as quantity mattered more than quality. A commander who would let his men go was risking them enlisting with his enemies. Or becoming bandits which would have to be “pacified”.

Soldiers were also opposed to disbandment campaigns. Those who stayed in the army had chosen to, given how easy deserting was. A person having been a soldier for a long time would probably be estranged to his family and / or native place and having to cope with a return to a hard-working civilian life. Men who joined the army because of their dissatisfaction as farm labourer or factory worker were very unlikely to welcome the perspective of being forcefully returned to civilian life. Last but not least, NCO and junior officers also had much to lose with the disbanding of privates, which made them ending up as unnecessary surplus themselves. As proper compensation or retraining were seen as expensive solutions, disbandment was not popular to them either.

Interestingly enough, civilians themselves were not extremely keen on disbandment as this meant letting former soldiers on the loose. These soldiers would probably feed local banditry groups. This could lead local or regional authorities to take actions to make sure the disbanded men would not cause trouble. For instance, a disbandment that took place in Shaanxi in 1916 saw regional authorities pay for the immediate relocation by train of six regiments from Anhui, Henan and Jiangsu out of the province!

Retirement was nothing common in China and not for the reasons you could imagine. Army pensions were a rarity and retirement bonuses scarce as well, leaving the retiring soldiers on their own. This prompted the men to accumulate resources on their own through looting and savings on wages, in hope of a comfortable retirement. The violent, thoughtless and lazy behaviours soldiers learned in the army were unacceptable in a civilian world, preventing them from ever really fitting in again. You should also add on top of this that a soldier knew great but clearly identified and limited danger: enemy on the battlefield. In the civilian world, danger could come from anybody as potential enemies were everywhere; this was harder to cope with for leaving soldiers. This explain why middle-aged and elderly soldiers were not a rare sight in armies.

The difficult return to civilian life

But where do deserting, disbanded or retired soldiers go? A few options were open to them. Provided they have enough money and/or are not too far away from home, some make their way back to their families / villages. Others, particularly those from a defeated army, try to find another unit to enlist in – in that case, they remain around the battlefield, waiting for their potential next employer. The rest goes into banditry.

Return to civilian life was particularly difficult for soldiers who had been with an army for a long time. They were accustomed to military life. The army provided them with a home, a family of comrades and the possibility to avoid having to decide for themselves. Long-time soldiers were no longer used to long, hard physical work. Unless they had known a specific trade prior to their enlistment, the discharged soldiers were unlikely to find adequate employment. Leaving the army meant abandoning of world of relative certainties (train, fight, get paid, loot, chores, drill, move, etc.) for a return to a life of civilian uncertainties – not knowing whether the harvest would be able to feed one’s family.

Our journey with Chinese soldiers eventuall came to an end and we hope you enjoyed it. You can expect to see a lot of elements highlighted from this series in the game – managaning an army will definitely not be an easy task.