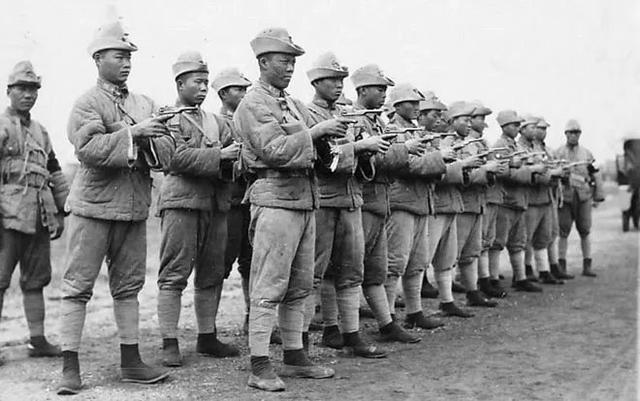 We today initiate the return of our focuses with a key topic for Rise of the White Sun: armies, and more specifically soldiers that comprise them.

What would a warlord be without armed men to do his bidding? Nothing. The whole era would not have existed without the huge number of armed men having a different allegiance than the central Beijing government. And, the game willl

This first article on the topic owes its fantastic deal of information to Diana Lary’s book Warlord Soldiers – Chinese Common Soldiers 1911-1937. Cambridge, Cambridge University Press, 1985. 177 pages. That one is a solid and short (111 pages without appendixes, notes, bibliography and index) academic introduction to the topic. Even better, the read is rather easy and fluide. In a nutshell, well worth the money and time!

And now, without further ado, let us jump into the soldier life in the 1920s!

« You may not need soldiers for a hundred years, but you cannot be one day without them. »

Surprising, coming from the man who advocated the supremacy of civilians over the military, isn’t it? Well, the great sage still acknowledged soldiers had a role to play in order to make the state secure and peaceful – to protect it from external aggressions and safeguard internal order. The military was to act as a passive deterrent rather than an active force but they nonetheless remained crucial. Should they fail, chaos would follow. And it did.

From guardian of the Empire to sources of disorder

China was heavily shaken in the 19th century by two things: large revolts and the Western aggressions. The Qing attempts at modernising its forces (Xiang army [1850-1864], Huai army [1862–1894] and the New Armies [1895–1912] came too late and were too limited in scope. By the time the Empire had a somewhat decent military force, the Westerners and Japanese were no longer interested in attacking China for territories. This left Qing soldiers with no external enemy to deter or deal with until 1932 and the Japanese attack on Shanghai. These men were left with the sole preservation of internal order. They soon became the major source of disorder!

The 1911 Xinhai revolution that overthrew the Qing dynasty started from a mutiny of New Army soldiers based in Wuchang (district of nowadays Wuhan, merged with Hankou and Hanyang). The army, as a central element of the Revolution, began growing self-confidence among the soldiers. They were no longer struggling with the powerlessness feeling from their predecessors, who repeteadly failed at resisting foreign encroachment. Increased militarisation went with growth of violence as soldiers’ status was on the rise.When President Yuan Shikai died in 1916, militarises no longer under control. Thus begun the Warlord era, fuelled by huge numbers of soldiers idling in peace time…

And they jolly did fuel conflicts in1920s China! If you leave aside skirmishes and small-scale clashes, between 1912 and 1930, China has on average 8 full-scale wars per year. Eight! Only 1914 and 1915 were free of conflict. 1928 was the all-time high with no less than 16 separate wars.

There is no accurate central record of the number of soldiers in this time. Those publicly stated by the Ministry of War in Beijing or others are, at best, dubious as numbers tended to be inflated to impress enemies. Diana Lary deems it safe to say that, between 1911 and 1928, soldiers quadrupled in numbers. Rough estimates have been made by scholars. Here below an estimation provided by Jerome Ch’en:

Such numbers, for a country in peace time, are enormous. Guess what? Numbers presented above are only estimates of soldiers regularly enlisted in large armies! China’s armed men tended to be grouped together in common speech as bingtuanfei, soldiers-militiamen-bandits, whose “hierarchy” could be established as follow according to Diana Lary:

A clash of worlds: militaries-civilians

« It is better to have no son than one who is a soldier. »

These two Chinese proverbs set the scenes. Being a soldier was associated with a lot of negative characteristics in traditional and warlord China. Though despised in the Chinese culture, the social status of soldiers started to evolve from the 1910s onward. This was however limited to high-ranking officers, whose status went up because the military had become the new route to power and wealth. Common soldiers, on the other hand, remained with a very low status

A man with a gun is dumb

Often considered stupid, uncivilised and rustic, soldiers were perceived by the Chinese civilians as “at best an unfortunate necessity and at worst as a painful burden”. Their alledged stupidity was mocked but it was also feared, considered dangerous. A dumb soldier would be malleable enough to do what his commander wanted (often to the detriment of the civilians). Wu Peifu’s troops fighting at Shanhaiguan in 1924 were reported to be “good fighting men” because of their “lack of intelligence” that had « annihilated » their sense of self-preservation. Stupidity was also correlated to an evil mental deficiency and / or deliberate sadism, consubstantial to soldiering. Civilians saw themselves as extremely superior to soldiers, mere creatures of abysmal moral standards.

Enlistment was seen as the acknowledgement of one’s unfitness for civilian society. In fact, the Chinese gave credit to the theory that some men were born soldiers, not made such. Only the rebel, violent and antisocial was thought to ever want to go to the army. Because of the bad character attached to soldiers, civilians were expected bad behaviour from them. Anybody wearing a uniform and having a gun was expected to be brutal, arrogant, stupid, cheating and thieving. These assumptions explain why civilians so much disregarded soldiers, whether the men in the uniform were actually bad or not.

Interestingly enough, officers often shared civilians’ assumptions about their own men. Both the Guomindang and Feng Yuxiang have been known for issuing lists of prohibitions based on what they saw as expectable soldier behaviour. These targeted the usual suspects: drinking, smoking, consorting with prostitutes, gambling or committing illegal acts. Some more specific regulations would be introduced like being forbidden to go behind the counter when negotiating with merchants. GMD soldiers were ordered in 1926 not to seize coolies, loot, steal provisions or requisition houses.

The worst in all of this is that what civilians believed and expected about soldiers was rather true. Soldiers were more likely to be rustic, arrogant, brutal and greedy than fine young men of the highest moral standards. Soldiers of the Red Army were quite a (positive) shock in newly liberated areas, at least at first. But why would soldiers behave this way? Several explanations have been put forward:

Some attempts were made to bring up soldiers to a higher level of moral standards. Warlords like Feng Yuxiang, Li Zongren or Cai Tingkai. Their troops were commonly acknowledged as being of good quality, thanks to their more humane treatment of men. Most warlords did not bother: the effort would have been to great for insufficient rewards in a system such as warlordism.

Violences against the civilians

Violence was however unevenly distributed in China. Areas of regular military operations were more prone to looting then places garrisoned with well-disciplined troops. Soldiers were more dangerous in groups, taking strength in numbers, than alone. What was a constant anxiety for civilians was the unpredictability of violence, generating a constantly tensed and insecure situation. The rich could try and hide their riches behind bars or foreigners’ nominal possession (cases reported in Guangzhou in 1924). A luxuryt the poors had not. This made them the primary victims of army depredation.

Violence soldiers inflicted on civilians can be distinguished into two categories: by the army as an institution and by soldiers as groups or individuals.

As an army, the following acts of violence against civilians can be identified:

Individuals soldiers or group of them would be associated with the following depredations:

Though military violence was endemic and apprently endless, this does not mean civilians never fought back. Militias and elites were nearly useless in fighting back as they preferred to find an arrangement. The people would sometimes take things in hand. In 1920, for instance, the people of Hengxian in Guangxi savagely attacked Cantonese stragglers who were retreating to Canton; the villagers murdered as much as they could. Even more surprising, the peasants of Shangzhi (Hunan) formed their own army in 1919 to resist forced labour. They remained in operation until 1929 and a crackdown by He Long. Secret societies sometimes organised resistance against marauding soldiers. In 1929, for instance, members of secret societies were reported to undertake actions against soldiers in Shaanxi and Shanxi.

We will conclude this long first part here for today. Hope you enjoyed this bit! Next time we will talk about the soldier himself, from recruitment to leaving the army. Stay tuned for more DDs and content!