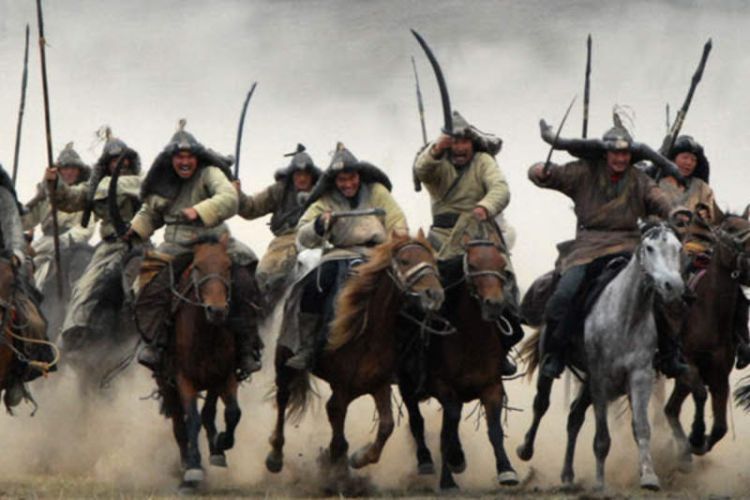 The time has come for us to resume this series of posts on the history of China! We are now reaching a time of unity for the country: the Yuan Dynasty.

They rode down from the North

In the previous DD, we left you with the death of the Sòng cháo (宋朝, Sòng dynasty). They managed to survive until 1279 and the battle of Yamen but, as you already know, their demise had started a long time ago.

In 1206, a formerly obscure Mongol warrior, Temüdjin, is elected Great Khan of the Mongols after having united the Mongol tribes. He will from now on be known as Genghis Khan. If you are interested in his rise to power prior to these years, there are few sources available. We highly recommend you to read the Secret History of the Mongols (available in full text here).

Our purpose is not to go through the entirety of the history of the Mongol Empire, which was the largest continuous empire ever. We will instead zoom on the briefly summarised conquest of China.

By 1227, the Western Xia had been integrated in the Mongol Empire shortly after the death of the Genghis Khan during the siege of Xingqing, their capital. In 1234, the Jin Empire ruling the north of China is destroyed and integrated as well by Ögödei Khan, son of Genghis Khan and leader of the Empire. In 1260, Kublai Khan starts ascending to power after the successive death of his brothers Möngke and Ariq Böke. Needless to say, this was not a quiet succession…

In 1264, once his brother Ariq Böke is defeated and he formally assumes control of the empire, he plans for the transfer of the capital from Kakakorum to a new city, Khanbalik (Daidu in Chinese, nowadays Beijing), whose construction begins in 1266. Kublai Khan is the one who decided to give birth a new dynasty for China in 1271 and claimed the Mandate of Heavens: Mongol China would be known as Dà Yuán (大元) or Great Yuan, known in Mongol as Dai Ön Ulus. Recognised in name only as the Khagan of the entities of Mongol Empire, he made the Chinese territory his land and intended to settle into a sedentary Empire.

Developing the image of a wise Emperor, respecting Confucean traditions and venerating the ancestors, Kublai Khan also had to keep cultivating his steppe origins. China undertakes an administrative reorganisation, achieved by 1294.

Kublai Khan is a keen supporter of commerce, science and culture. The Silk Road system is encouraged by protecting the Mongol postal service, expanding infrastructure to host caravans and promoting the use of paper money. Kublai Khan also has the Grand Canal expanded to Khanbalink in the north. The Pax Mongolica enables the circulation of technologies, goods and cultures between the East and the West. Kublai Khan’s court is extremely cosmopolitan: people from South East Asia, the Middle East and even Europe are present. You all know about Marco Polo who stayed in the Khan’s court for 17 years. But have you heard of the Musliam explorer Ibn Battûta? Or the Franciscan monk Guillaume de Rubrouck, sent by King Louis XI and the Pope to (unsuccessfully) convert the Khan?

Expanding the empire, keeping it together

Kublai Khan and his sucessors will continuously seek to expand their territory. We have already mentioned the campaigns against the Songs, whose conquest is completed by 1279. These campaigns were aided by a military integration policy began under Genghis Khan. Kublai Khan established a « Han Army » made of troops from the now defunct Jin Empire and a « Newly Submitted Army » with defectors from the Song. Thanks to the recent Ghost of Tsushima game, you also learned that the Mongols attempted to invade Japan twice, in 1274 and 1281. Both expeditions failed miserably, the 1281 invasion being thwarted by an unpredicted typhoon (Kamikaze, rings a bell?).

What we seldom know is that the Mongols also attempted to invade Đại Việt, Champa, Java and Burma to establish tributaries. The first three were also failures but these kingdoms eventually recognised the Chinese hegemony and paid tributes. A Pyhrric victory in Burma led to nothing of interest for Yuan China. Unfortunately for Kublai Khan, his rule was contested from the inside. By 1279, the Empire was running short on funds due to war and great projects, encouraging corruption and wishes of independence. A former ally, Kaidu, attempts to seize the Chagatai Khanate in 1268, prompting a long war to protect this territory. Revolts in Tibet and the North East wore down the late year of Kublai Khan’s rule, who neglected his duties as Emperor in 1293 to die the following year.

Surviving a population that hates you

Kublai Khan’s successors are overshadowed by him when you talk about the Yuan dynasty. His succession in the Yuan dysnasty was sort a nightmare, sources of conflicts and internal struggles. Some 11 sovereigns came after him and the dynasty reigned until 1368. How can the demise of the dynasty in barely 100 years be explained?

A key factor was the foreign origin of the Yuans. The Yuan emperors never really managed to strike the right balance between maintaining their Mongol identity and embracing the Chinese culture and modes of governance. Despite their willingness to surround themselves with Chinese counselors like Chengzong (成宗) et Renzong (仁宗) who were respectively given authority over the Northern and Southern Daoist sects, the Mongol rulers were and remained considered foreigners occcupying China. Ayurbarwada Buyantu Khan (1311 – 1320) who was the first to fully embrace the Chinese culture, only managed to anger part of the Mongol aristocracy while having little impact on the Chinese opinion. The Yuan decision to abolish the imperial examination system to give way to the Mongol aristocracy for key positions was also instrumental in generating dissatisfaction. Ayurbarwada Buyantu Khan did reestablish the examination system in 1313 but this only marginally improved the situation for Han Chinese.

The rules of the last Yuan emperors are short and plagued by coups, factionalism and revolts. From the 1340s onward, droughs and floodings generate severe famines across the country. The absence of efficient and committed governmental policies favoured revolts. These were increasingly taking a nationalist turn, as the feudal lords manipulated the people against the Mongol rulers. In 1351, the Red Lotus (also known as the Red Turbans) sect rises against the emperor. When commander Toghtogha takes the leadership of an army to quell them in 1354, he is immediately dismissed by Emperor Toghon Temür out of fear of betrayal. While strengthening Toghon Temür’s power for a while, this move weakens the administration and forces the emperor to rely on local warlords to beat the rebellion.

A terrible idea. Zhu Yuanzhang (朱元璋, zhū yuánzhāng), a Han Chinese who learned Mongol military tactics and took the lead of the Red Turbans, eventually overthrew the Yuan dynasty, capturing Khanbalik in 1368. The Yuan dynasty fell to give birth to a new Chinese dynasty. Zhu Yuanzhang crowned himself Emperor Hóngwǔ (洪武) and founded the Ming dynasty (明朝, míng cháo) in 1368. Toghon Temür however managed to flee to Shangdu beforehand, narrowly escaping death and unsuccessfully attempted to recapture Khanbalink until his death in 1370. Chinese armies attacked Mongolia from 1380 onward and Kakarakorum, the old capital, was taken in 1388. The former overlord was now ruled by a Han Chinese dynasty.

Culture, economy and science under the Yuan dynasty

The Chinese society under the Yuan was marked by an ethnic casts system designed to maintain strict control over the Chinese:

Marriage between the Mongols and other casts was prohibited, what contributed to maintain the foreign character of the nobility and imperial family. All key positions were reserved to the Mongols. On territory where Hans were the majority, Yuan preferred to appoint non-Han officials as administrative employees, including Europeans and people from the Middle East. The Hans who managed to join the imperial admistration were usually sent to the margins of the empire.

On the religious side, the Mongols were known for being very tolerant toward local religions. While some emperors supported Daoism and Confucianism, Buddhism had the Mongol’s favours. Chan Buddhism, represented by Zhongfeng Mingben (中峰明本, 1263–1323), was the court main religion until 1269. Kublai Khan decided afterward to entrust the Sakyapa family from Tibet with the control of all the Buddhists in China. This is the reason why Mongolia followed (and still does follow) Tibetan Buddhism. Külüg Khan (1307-1311), a devout Buddhist, had the main texts of Buddhism translated into the Mongol language and heavily supported the Tibetan lamas (guess who was outraged? Yes, the Confucean scholars). Following Buddhism did not erase steppe traditions among Yuan emperors: for instance, Tengri ceremonies were still organised to sustain the Mongol claim to the Mandate of Heavens.

Progress in science did not stop. The work undertaken under the Song dynasty was thus continued, like developments in mathematics by Zhu Shijie and Guo Shoujing. The latter was also the creator of a modern irrigation system in the former capital of Shangdu. In the field of astronomy, the creation of observatories and in Dadu and on Mount Song along with the invention of clever clepsydra were central in developing knowledge. Jamal al-Din, a astronomist of Persian origin, created the dynasty’s calendar.

The Yuan also had the ambition to create a writing system to unify the multilingual Mongol empire. Drogön Chögyal Phagpa (1235 – 1280), a Tibetan lama, was entrusted by Kublai Khan with this task and gave birth to the Phagspa writing system finalised in 1268. This writing system was made official in 1271 for the empire and was used for some 110 years, as the Yuan were overthrown. It can be found on all official documents of the era: edicts, official seals, passports, etc. And paper money.

Yes, you remeber that paper money was invented by the Song dynasty. However, the Yuans tried something daring: Külüg Khan (1307-1311) enacted a moneraty reform. All coins were replaced by banknotes and paper money! This country-wide experience of paper money lasted until the rule of Toghon Temür, who reauthorised metal coinage.

The Yuan era saw a rise of theater with the emperors paying for resident theater companies in their palaces. Musical accompanying of plays was introduced under the Mongols. The Romance of the Western Chamber (西廂記/西厢记; Xīxiāng Jì) is seen as one of the masterpiece of the Song dynasty. Litterature in vernacular language, novels and travel accounts also developed during this period.

The Yuan dynasty also enabled a boom in chinaware. Thanks a secure and safe Silk Road, cobalt from the Middle East can be imported to sites like Jingdezhen for painting floral and ornamental patterns on chinaware, inspired by Persian culture. These patterns had the advantages of being quick to paint, enabling these chinaware to be ready for mass exportation!

From a scholar/lettered person point of view, the Yuan rule was also an era of (relative) freedom. Kublai Khan had the Song academy disbanded, involuntarily removing the traditional rules for arts. Han scholars who were sent away from the capitals and big cities, were now able to explore liberty and « individualist » subjects. Four Han scholars are now acknowledged as the leader of this movement of resistance to the Yuan sovereign: Huang Gongwang, Wu Zhen, Ni Zan and Wang Meng. We have a few pieces of arts here below for your eyes!

And this, fellow gamers, concludes this new post about Chinese history. Hope we managed to keep interested throughout this long piece of text! Stay tuned for more DDs!